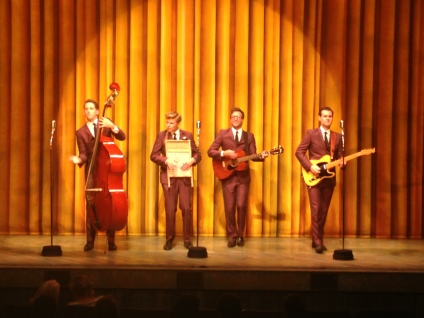 The band, “The Craze”, before the play (Photo: Jessica Williams)

Last night I saw One Man, Two Guvnors, a production of Britain’s National Theatre bought to Sydney by The Sydney Theatre Company.

The show had hugely successful runs in London and New York before coming out to Australia for the Adelaide Festival and now Sydney.

Shifting the action of the Italian play A Servant of Two Masters by Carlo Goldoni to 1963 Brighton with visually bright sets and costumes. We are really only left with the plot of Goldoni’s play, but a superb plot it is.

This production is a masterpiece. From the moment you take your seat to the skiffle music of the house band you are entertained. The band will be back several times, often accompanying a cast member or three, during set changes and after interval giving the show a slightly vaudeville feel.

The play itself is a masterpiece of visual and verbal comedy, though the second act after interval doesn’t have the strength of the first which is a marvellous slow build to the last scene which had me laughing so hard I was in danger.

Owain Arthur as the servant, Francis Henshall, gives a brilliant performance throughout. He is backed by a marvellous ensemble from whom it is difficult to find a standout performance as all do so well though Mark Jackson, as 87-year-old waiter Alfie, is a classic clown with some superb physical comedy.

This was by far the funniest play I have seen on a Sydney stage in decades. It is the humour of Goldoni filtered through classic British comedy of slapstick, farce, sight gags and often just plain silliness.

My one complaint is that the sound was terrible with lines lost in some scenes and the lyrics to the songs often impossible to understand. Why it can’t be done better in production that has toured to many theatres is difficult to understand, both the production and the STC should have done much better.